The Manuscripts of Mestre Pastinha

Several years ago, Teimosia, a capoeirista well known for his many capoeira related videos on youtube, digitalized some of the writings of Mestre Pastinha.
These writings are in the possession of Dr. Decanio, the oldest student of Mestre Bimba, currently, alive.
He gave permission to digitalize and publish these writings and because of the effort of both, people all over the world now have acces to thoughts of Mestre Pastinha about capoeira, together with some of the history of his academy a well as various of his drawings.
Reading these words can give people insight of what Mestre Pastinha intended with and for Capoeira Angola. Cover of one of the Manuscripts of Mestre Pastinha

Mestre Pastinha, beeing one of the principal Masters of Capoeira Angola of the past, thus gave others an opportunity to learn about his life and filosophy without having known him personally.
Few Masters of the past had so much of their memories written down. To mention two others who also left their toughts and memmories: Mestre Noronha and Mestre Canjiquinha.

Two pages of the manuscripts

Things that Mestre Pastinha created or practised in his academy are nowadays pasted on by several Capoeira Angola groups.
Examples are the usage of shoes, black collored pants and yellow collored t-shirts.
Not al of his old students follow this same style of uniform, but all are aware of their roots.
It is always good to keep in mind that within capoeira there are several lineages with different traditions and tastes.
These lineages, even stemming from the same source, can change over time because of the choices of the masters passing on their lineage.

What made Mestre Pastinha special, next to the fact hat he was still active in capoeira at an old age, was his way of expressing his thoughts about Capoeira.
Also the fact that he tried to organize Capoeira Angola and that he was the first Capoeira Angola Master to officially register his school. 
Mestre Pastinha also shared some of his memories on his LP released in 1969, about capoeira in the past.
Also singing: "Pastinha já foi a Africa, pra mostrar capoeira do Brasil" 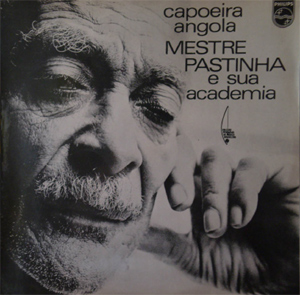 He was the first Capoeira Angola Master, to visit Africa, in May 1966, together with Mestre Gato Preto, Camafeu de Oxossi,
and his students who are now masters: Mestre João Grande, Mestre Gildo Alfinete and Mestre Roberto Satanás


The sixties where a productive time for Mestre Pastinha. Next to teaching, recording an LP, giving various presentations including the one in
Dakar, the Capital of Senegal during the first Festival for the Black Arts, he also published a book: Capoeira Angola.

The First Edition of the book of Mestre Pastinha, signed by the author (Acervo Rouxinol)

Mestre Pastinha also maintained a good relationship with several famous people in Bahia during his life, like
the writer Jorge Amado and the artist Carybé. And so within his published book there is a photo of him, together with Jorge Amado: The writer who sold millions of books all around the world, also including capoeira and Mestre Pastinha in his stories. The cover of the book was made by the famous artist Carybé who had a special style of drawing and painting, easily recognisable from afar, who has held expositions of his work in different art galleries of the world. 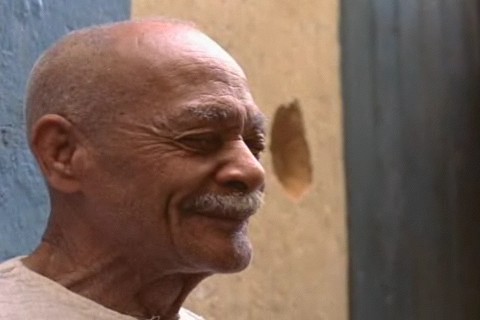 Mestre Pastinha participating briefly in the movie: Tenda dos Milagres, after the book of Jorge Amado

Now, returning to the Manuscripts... They are online, and easy to download for free.

Teimosia has made A Galley of Photos of the Manuscript and Extra Pages which you can access here.

The nice thing is that he took the effort to type down the words of Mestre Pastinha of several pages for those who would have difficulty reading the handwriting.
Extra nice for those who do not read portuguese well, is the possibility to copy-paste this tekst into a translator, to be able to understand more of the manuscripts.

Mestre Decanio also created a book citing phrases of Mestre Pastinha and contemplating about these in his book.
It is called "A Herança do Mestre Pastinha": The Heritage of Mestre Pastinha
This is truely recommendable literature for anyone interested in a better understanding of Capoeira.

A Herança do Mestre Pastinha, you can download here

The Heritage of Mestre Pastinha, kindly translated by Shayna McHugh, you can download here.